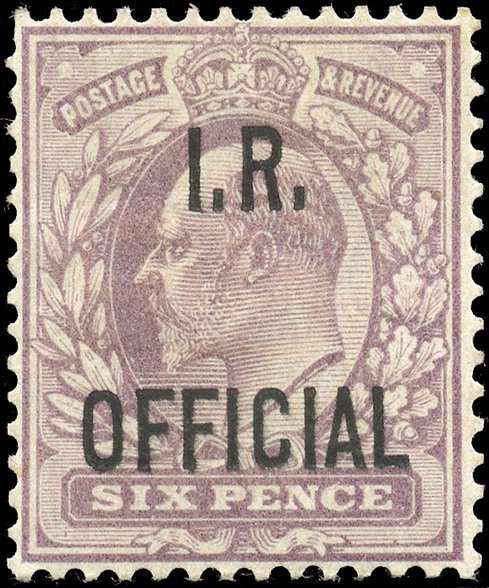 S.G. #O23, 1904 6p Pale dull purple, ''I.R./Official'', the incomparable mint single, well centered, deep rich color, o.g., very fine (Scott #O22). The 6p ''I.R. Official'' was issued on March 14, 1904 and was officially withdrawn on May 13, 1904. This value was almost never used, but when it was, there were instructions within the Inland Revenue Department that they were to be so heavily cancelled as to make them essentially worthless to collectors. Therefore, of the six known used examples, virtually all of them are of very poor quality. Mint examples are another story. There is a sheet of 234 stamps housed in the Heritage collections of the Post Office (a complete sheet less six stamps) and eight other examples. Of the eight, a single and a pair are held in the Royal Collection and a block of four is in the National Museum of Ireland in Dublin. This block and the pair in the Royal Collection are believed to have been removed from the sheet held by the Post Office. Essentially all are permanently housed in institutional collections never to be available to collectors - except the extraordinary example offered here - the only example in private hands.With only one available to collectors, this stamp is the key for any collector hoping to obtain a single mint example of every stamp from Great Britain, or of the entire British Empire for that matter. An extraordinary opportunity to acquire one of the rarest and most coveted stamps in the world. Accompanied by both a 1968 RPS certificate and a 2000 BPA certificate; ex-Harrison Cripps and Bill Gross Collection. (SG-2020 CAT £475.000).

The listing has no bids.